Some of you may have noticed that I’ve not ‘posted’ for a few days and it’s because I’m in the midst of a DIY DISASTER? I’m sure anyone who has suffered a similar ‘plight’ will sympathise when I explain ….

We decided after Xmas that it was time for our kitchen to receive a bit of TLC in the form of a DIY inexpensive Kitchen Makeover.

I did my research via Pinterest (Ha – those PERFECT pictures … ) and I decided that if we renewed a couple of our kitchen base units which after 27 years and several water leaks over the years (don’t ask.. hubby and DIY plumbing don’t match.. but he’s a ‘tryer’ so I can’t complain!), are literally falling apart and then if we added a new kitchen work surface and some Annie Sloan Chalk paint, our kitchen would be ‘transformed’ in the same way as the wonderful ‘makeover pics’ on Pinterest!…

What could go wrong?

…… The Answer…. Pretty Much EVERYTHING and now I’m in the middle of one almighty DIY Disaster!!! Who posts those pictures? I’m going to ‘kill’em’!!!

Having emptied the contents of the kitchen cupboards, my ground floor now resembles Steptoe’s junk yard…  I can’t imagine how we fitted all this crap into the cupboards. It  was like the ’emptying of Mary Poppins Bag’ … it just seemed to keep filling up.. the more I took out, the more there seemed to be to empty. I’m sure it’s not THAT long since I cleared the cupboards out previously!!!

Eventually, my house was filled with the contents of the cupboards – every surface, box, storage crate has been filled up..

Ever the ‘optimist’, at this stage, I was thinking…. Not to worry, it’ll only be a few days and we’ll be all sorted with a beautifully transformed kitchen…

Full of enthusiasm… next it was the old cupboards that would be pulled out….

Although we’d replaced the doors and work surfaces a couple of times over the years, the base units on one half of the kitchen were the ‘original units’ in situ when we first moved in 27 years ago… I wasn’t quite prepared for the shock of what was behind them when we ripped them out …… Aghhhhh… MINGING!!!!

1960’s orange floral wallpaper in between the crumbling plaster and exposed brickwork, is probably bad enough but add to that, the grease, coagulated food crumbs, dead spiders, snails and slugs that have clearly found there way behind the units over the last 50 years….

At this point, I’m definitely losing my ‘enthusiasm’ and thinking… WHY DID WE START THIS?

Have you heard the old saying: ‘What the eye doesn’t see, the heart doesn’t grieve over’…

Well it’s true.. I didn’t ‘grieve over the kitchen cupboards’ when I didn’t know what was lurking unseen for 50 years…. BUT NOW I HAVE SEEN – My eyes are WIDE OPEN!!! I’m definitely ‘Grieving’….

Being the ‘thoughtful’ person I am, I wouldn’t EVER show you the nightmarish sights that I was subjected to when the cupboards were removed… Not least because I’d be ‘mortified!’ ……

My enthusiasm has definitely ‘disappeared completely’ now… as when hubby tried to get the tiles off the wall, he also ‘broke’ a hole in the stud wall…  I suppose you could say ‘in for a penny, in for a pound’ when it comes to requiring a plasterer…

I’m now managing with a sink very precariously ‘propped up’ on a stick and tomorrow, we’re going to ‘play at camping’… the camping stove seems the ‘best option’ now that the cooker has had to be dismantled due to a leaking gas pipe. In fact, it’s a shame our tent had to go for repair or that’s where I’d be living!…

Indeed I could be tempted to leave the ‘gas leak’ and let the ‘kid’ who tried to set our hedge on fire a couple of days ago come and use his lighter in the house! …. just a thought!

I’m sure you’ll understand why there’s been no time for blogging, as the last few days has been ‘deep cleaning time’….

Oh and did I mention…. It’s now  ‘mopping up time’… the Stop Tap has just Sprung A LEAK!!!

Have you ever had one of those days where you just want to bury your head back in the sand and wait for it all to go away? Yep – that’s me now…

Not a cat in hells chance..

“Where’s the ‘f***ing plumber” …. Excuse my language.. I don’t swear often but….. HELP – I wanted a beautiful ‘makeover’ kitchen not Noah’s Ark!

Bless him… (NOT)… hubby keeps telling me “It’s ok… it always looks worse before it gets better!” ….but at this moment, I’m not seeing even a chink of “Light at the end of the tunnel”. All I’m seeing is £money flying out of the window… oh and a Pig just flew past the window too!!!

I’m now on my 3rd tester pot of the Annie Sloan Chalk Paint…. and after my son and my hubby laughed their socks off at my ‘wonderful painting’, I’ve decided to throw in the towel and am now undertaking further Internet Research… this time into the best and CHEAPEST replacement kitchen doors!

I’m sure I’ve mentioned previously, that when it comes to Vision Boarding, you don’t always receive your ‘vision’ in the way you expected, so I’m clinging onto Hope…

I’m hoping that this is one of those occasions where it all has to go ‘disastrously wrong’, for the final ‘outcome’ to be amazing and that very soon I’ll be looking at my ‘vision board’ and ticking off the ‘beautiful new kitchen’ …..

The only problem is that I’m clinging on by my fingernails.. and after 3 days of ‘Deep Cleaning’ they are looking decidedly ‘raggy’ and ready to rip off at any moment….

If I don’t drown in the ‘sea of water’ before the plumber arrives, hopefully I’ll be resuming ‘normal blogging’ very soon and in the meantime… Wish Me Luck! Oh and PLEASE – fill me in on your DIY Disasters…. if only to make mine seem not quite as bad!

Hopefully, at some point, these lovely new ‘caddies’ will have a beautiful shelf to sit on…. 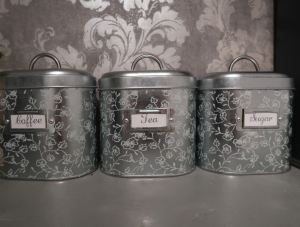 When I downloaded the photo’s for this post, I came across this photo that my granddaughters and niece had taken without my knowledge.. It was probably when I was in the midst of mopping, steaming and scrubbing no doubt, and it pretty well sums up my thoughts to  those people who successfully ‘made over’ their kitchens and posted their ‘perfect pictures’ on Pinterest….

I love to read your comments... It's always great to start a conversation! Cancel reply

This site uses Akismet to reduce spam. Learn how your comment data is processed.